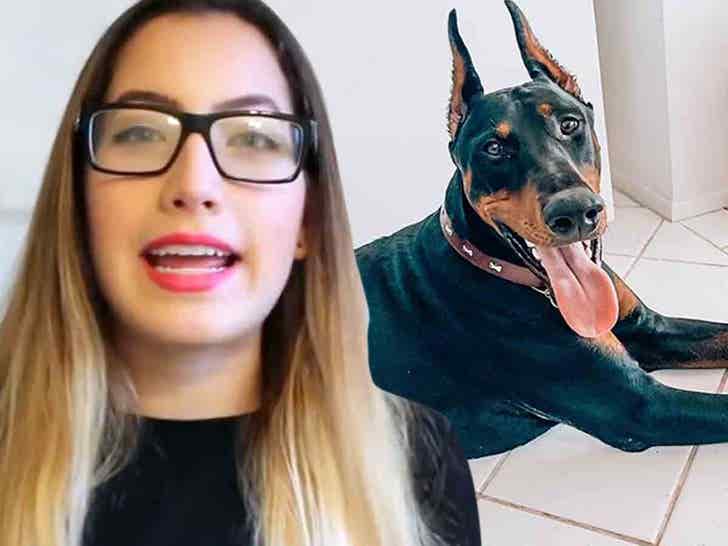 I don’t usually write posts about other people unless in a positive way, but I’m sure most of you have seen in the news or online, about YouTuber Brooke Houts, and how controversial this topic is. Admittedly, I went to watch it with in mind, that okay, maybe it was just edited badly or blown out of proportion, I didn’t want to be influenced by other people’s opinions, but boy I was thinking so wrong, and at the time, I didn’t realize the clip wasn’t meant to be in the video.

Why is the video so bad?

Brooke accidentally uploaded a video with a clip she forgot to edit out, of her and her Doberman Sphinx. What makes the clip so bad is, while filming an outro Sphinx jumps up at Brooke, she smacks him and then she shouts “NO!” at him, followed by pinning him to the floor and spitting on him. I didn’t realize she spitted on him, until I watched it back, and she very clearly does. Later on he then tries to lick her face, Brooke then shoves Sphinx out of the way. There are various bits where they aren’t in camera view, but I wouldn’t like to think what happened then. If I was to be fair though, you can’t see to judge, you just have to base it on the facts that you have seen, and this video was really uncomfortable to watch, and I was so shocked and disgusted by what I saw. Sphinx just looked like he wanted to play.

How it’s played out in the media?

Well, this has well and truly blown up in the media! Not only in the papers and in the news, but also chat shows and other media outlets, and numerous amounts of celebrities have voiced their opinions. It was bound to happen, it is totally unacceptable the way she treated her dog. Just by the look on her face, you can see her anger towards Sphinx. Her ex boyfriend has also come forward, saying she abused his dog, and not treated it with the respect it should have been given. There has also reportedly been tweets in the past, showing more anger towards her dog. I however don’t follow her on any social media, so I wouldn’t know about this. With this being so in the media at the moment, its reached numerous animal charities and LAPD has launched an investigation into it.

The outcome of the investigation?

Police have since been over to Brooke’s home to investigate, and to my knowledge she is allowed to keep Sphinx for now, as they don’t believe he is in any danger. I’m not criticizing how things are done over there, but judging from the outcome of animal charities that have seen this video, and everyone else who has seen it here in the UK, I feel like it may of had a different outcome right now at this point in time. LAPD is still investigating though, so we shall wait to hear what happens next.

Brooke soon released an apology after the video circulated. The apology included that her outside life has been less than exceptional, and explains she was attempting to calm her dog down, but says the way she handled it was incorrect. Firstly, just because your life might not be great right now, doesn’t give you the right to treat an animal like that. However she has admitted that what she did was wrong, but I feel like this doesn’t cut it one bit. She also denies spitting on the dog, but anyone can see that she did. She would be better of just admitting to it, because I feel denying it, will make the backlash even worse for her now.

Brooke had a following of 335, 000 subscribers on YouTube, but since the upload, this has dropped by 8,000. I think although the worst of it has happened, there will still be a bit more of a drop yet. Subscriber wise, I think she has gotten off pretty lightly. but 8,000 less subscribers. will still have an impact on her channel. Not to mention less brands are going to want to work with her. They aren’t going to want any bad press surrounding their brand, so she’s going to loose out on that too. The only thing that worries me, is I feel like there is going to be more of a stigma around YouTuber’s now. I hope there wont be, but I think people are going to be questioning more about what footage is getting left out of videos, because of what one person did. As proven, this hasn’t been something that’s been forgotten about over night.

My first thoughts before seeing the video was try to be fair. That is so hard to do, when its very clear what actions are being made. It’s disgraceful behavior, and the dog just wanted to play. I don’t know her, however if you can’t give a dog the time, attention, and love it deserves you shouldn’t have a dog. It isn’t the dogs fault the way it’s behaving, its doing what is in its nature. Just because a dog looks cute though, doesn’t mean you should get it. Do your research, and if you don’t feel like you can handle it, let someone who can have it. I just feel like Sphinx should be given to a home, where its going to be treated like he should be treated, and not spat at and shoved, just for wanting to play.

There are lots of animal charities doing incredible amounts of work all over the world. If you would like to donate, here are some you could donate too.

Like I said, I don’t like writing negative things on here, especially when it’s to do with a person, but there are people defending her, and that’s fine, but I’m struggling to understand why? What are your views?

Love my journals 📖
Still not sure if I like this top or not...I feel a bit bare and bit colourful. 🤔
How could I forget that I met Tom Hardy at Christmas, he didn't say much...
Just found this 😊
Forgot to post this cake I made for my mum's birthday. It's not perfect, but it's better than what I thought it was going to be 🐱
Not the thing I wanted to see going through my camera roll, when I'm on a diet, 😫 I love 🍕