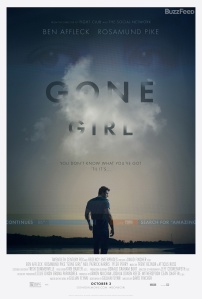 Title Of The Film : Gone Girl

It was date night again, and this time it was my choice to choose a film. I chose Gone Girl. I’ve been wanting to see this film since it came out on the 3rd of October and was intrigued to see what it was all about. As I was watching the trailer I noticed it was an 18. Why an 18? I know they can’t show this in the trailer, but reading the storyline I still couldn’t work out why it was an 18. After watching the film, well, well, well, boy was I wrong to question it…

Nick Dunne reports his wife missing in the early hours of the morning, on their 5th wedding anniversary. With Nick just wanting to be reunited with his wife again, the media and the police put him under pressure. This unveils the dark lies, and suspicious behaviour from him. With many twists on the way, did Nick kill his own wife?

Ben Affleck’s performance was outstanding in this film. I haven’t seen many films with him in but I will definitely remember his name from now on. He portrayed the emoticon effortlessly, and put us in his shoes. Rosamund did just as good of a job, in fact not one actor let this film down. It was also nice to see Neil Patrick Harris take on a different character, other than his Barney, in How I Met Your Mother. This just shows how versatile of an actor he is. Both Rosamund and Nick worked well together as a couple too and portrayed the secrets of their marriage across  to the audience really well. A well picked cast.

This is a well thought out and scripted film. Unfortunately I haven’t read the book, although I have been told that if you have, then the film won’t disappoint you. I really like the mystery and twists of this film, and the media made it exciting. This film could of quite easily of gone and literally lost the plot a bit, but it didn’t, it was easy to understand and follow. I like the fact that it keeps you guessing right till the very end as well. This was actually a really impressive film.

So here are some minor things that I didn’t like about this film. It was definitely longer than what it needed to be. I felt some bits they could of got rid of and it wouldn’t of made any difference to the film. It was 2 hours and 25 mins long, not a massive problem, just would of liked it a bit shorter. Also there were many times you thought it could end and it didn’t. This got a bit frustrating but not too much of a problem. Lastly it was a bit graphic and some parts were a bit sick, this I could just let go over my head, it’s just not something I personally want to see, as some things are a bit disturbing.

Overall I think I liked this film. I was in shock of what I watched the other night, and still think I am now. Very cleverly done, although not sure if I’d watch this again. Please let me know what you think of the film, if you have seen it, as I’m intrigued.