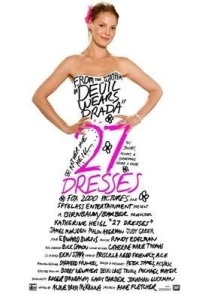 Title Of The Film : 27 Dresses

Hey guys! I haven’t been to the cinema in ages, which means I haven’t done a film review in ages, so I thought I’d do a review on one of my favourite films, even though it’s old and see what you think. I have picked 27 dresses for this, a real chick flick, so to the few guys that follow me, I am very sorry, but hey ho you might like it! 🙂

This film is about a lady named Jane. A romantic, selfless woman, who has 2 jobs, one being a wedding planner. However as much as she dreams about her own wedding,  that isn’t coming round the corner very quickly. This is because sister, Tes, falls in love with Jane’s boss from her other job, who Jane is secretly madly in love with. This then leads Jane reexamining her lifestyle of always being a bridesmaid.

Katherine Heigl gets into character so well, she really played the part. She is one of my personal favourites. She does comedy really well, you only have to see the film “Knocked Up” to judge that. James Marsden is also one of my recent favourites, from seeing him in “Hop” and “Enchanted”. He is the eye candy to this film, a great actor, heart throb and funny. Malin Akerman is an actress I haven’t heard of however she does a good job of playing the mean, always gets what she wants sister. These guys worked really well together and made it entertaining. I liked how it was quite realistic too.

Something I didn’t like… the storyline could of been a bit better, it was all a bit predictable, I feel like they could of put more twists and turns in to it but it’s a romantic comedy and that’s what you get with the type of genre. Maybe if this was given more time, then the storyline would be better, however it’s not a bad script, it’s just a bit basic. A lot of detail went into other things in the film, which is good, other than the script.

Overall I like this film, it makes me laugh time and time again, it is a film I have on DVD, and it’s girly with some eye candy in. What more could a girl want? Girls, what is your favourite chick flick?