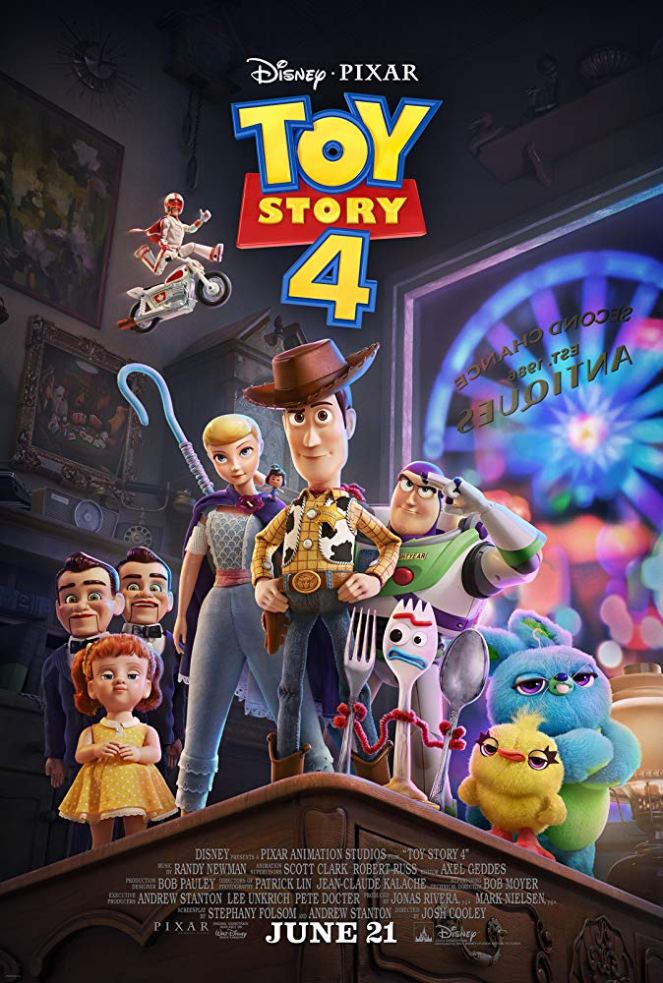 We have both been wanting to see the new Toy Story film, but this was a bit of a last minute plan. I say last minute, because we like to plan ahead of time, we only decided like I think Thursday or it may of even of been Friday to watch this. Most people would say last minute would be like an hour before, or on the day, but not us haha. I must admit, I’m now really in the mood to watch the other Toy Story films. I’ve heard a lot of people say to me, that they don’t know whether its gone past its sell by date, but here is my honest review.

The film pretty much continues on from the last one, it shows at the start a few bits of whats happened in the past, and then goes back to the present with the toys still being played with by Bonnie. Bonnie starts her first day at Kindergarten and is very nervous about it, when she gets there, she struggles to settle in, and with a little help from someone, she ends up making a new toy called Forky. Forky is pretty much self explanatory, he is a spork that has been made into a toy. All of the toys including Forky, go on a road adventure together, which turns out pretty crazy. I should also mention, the film was dedicated to two people, Don Rickles and Adam Burke, who both passed away in 2017 and 2018.

What I liked about the film? I liked all of it, in fact I love all of it! I loved the new addition that joined our much favourited toys, Forky, as I just admit sometimes when I hear they are adding new characters to a film where you already have a really good connection with and have your favourites, it can feel a bit risky. (Does that make sense? Not sure if I’ve worded it right?) However Forky fitted in really well and so quickly, and I just found him hilarious. In fact, I found the whole film hilarious, apart from the end! There was a tonne of funny bits which were funny for the adults too, but there was also quite a few innuendos, which have you in stitches. Not to mention that visually it’s a masterpiece, and the voiceover actors did an incredible job too. I would go as far as saying, this is the best Toy Story film so far! Toy Story 1 will always be a close second because that’s how it all started and it takes me back to my childhood, but Disney have taken their films to the next level recently, and most of my favourite films this year have been all be Disney/Pixar.

So there isn’t anything I didn’t like, but it really does take you on an emotional rollercoaster. I am still recovering from the ending, as it’s so sad! That isn’t the only sad bit in the film though, there are bits that really tug on your heart strings! Will there be another one? I don’t know. I feel there easily could be, because I’m not spoiling it but I feel like we need another, for peace of mind from the ending. However there was no hints that there would be another one, but I think Disney/Pixar films do most of the time like to do that anyways.

Another thing I wanted to mention, it’s not a spoiler in any way. Look out for references to Boo from Monsters Inc. I don’t know if that means there’s going to be another Monsters Inc film, or if Boo is going to get her own film, but for some reason I got really excited about all the references! It’s not just with Boo they reference to though, there is a whole lot of other things, see which ones you can spot! I would also stay till the end for the credits, as there are three short clips in there you won’t want to miss.

Have you seen Toy Story 4 yet?