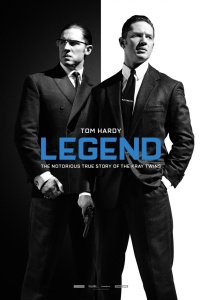 Title Of The Film: Legend

I saw Legend at the weekend and wanted to know what all the hype was about. I hadn’t really heard of the Kray twins but my boyfriend gave me a briefing of what they were about. I like learning about past history, especially if it was to do with London, I just find it so interesting, so this was definitely up my street.

For those who don’t know about the Kray twins, the film is based on true life people. The Kray twins are known as London’s most notorious gangsters. Reggie and Ronnie basically ruled London at one point, not many people messed with them, the wiser ones we shall say, who knew what the twins were capable off. The film takes us right back to how the Krays got so well-known, the dark events that took place in their everyday life, the relationships they had with people close to them and how things ended.

Tom Hardy was incredible in this! You would not know he was playing both of the twins, he well and truly deserves an award for this, and for taking us on a journey, through an emotional roller coaster. It’s a shame there isn’t a second part to this film, because I would like to see him play a similar role again. Emily Browning was also a brilliant actor, she played his girlfriend so well and also portrayed her emotions to us very well. In fact every actor made this film so believable and realistic, I couldn’t fault a single person. Not one person let this film down. This film made me laugh, and made me want to cry. I am definitely getting this when it comes out on DVD.

There was nothing I would change about Legend. The actors were right for the parts, it wasn’t overly violent. Speaking of violence, everyone says this is really graphic but I have since worse films, so to me people are overreacting on the graphic side of things. I guess it depends on what you watch and what you can tolerate. I like a lot of films that boys like therefore I enjoyed it, however I saw a lot of girls with their partners, who were bored stiff, so just like every film, it’s not for everyone.

Still waiting to be sponsored by Woodthorpe Garden Centre.. 🎄
What would you choose? Iced madeira, marble loaf, or banana bread? It's a tough decision..
The Holiday and online Christmas shopping 🎄
This was one of the best things I've done this year, raised nearly £170 in the end 🙂
To anyone who needs a little reminder recently ⭐
My hair couldn't be without this product now 👌